BTR-4M during tested by Korps Marinir (all photos : Ukroboronprom)

Ukrainian BTR-4M have been successfully tested in a tropical climate in Indonesia. It is reported by the press service of  “Spetstehnoeksport” .

Five Ukrainian military vehicles were delivered to Marine Corps Indonesia in the framework of the contract signed in early 2014 between the Ministry of Defense of Indonesia and SE “Spetstehnoeksport”, part of the GC “Ukroboronprom”. Produced this technique on SE “Kharkiv Machine Building Design Bureau. Morozov “, a member of the Group. Performance of the contract took place after delivery of the BTR-4, the major parties for the needs of the Ukrainian army, as part of reloading production capacity Ukrainian defense industry.

During the tests, in the presence of Ukrainian specialists were tested armored amphibious capabilities at sea, conducted fire tests in the highlands and proven running performance Ukrainian military vehicles on the road and on difficult terrain. 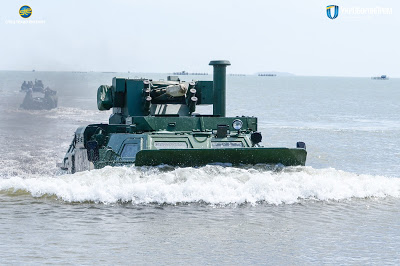 Director “Spetstehnoeksport” Paul Barbula noted that the tests carried out Ukrainian art commission, which included representatives of various departments of the Ministry of Defence of Indonesia. The realization of this contract was made possible by the effective interaction Ukrainian defense industry enterprises and the Ukrainian Embassy in Indonesia. 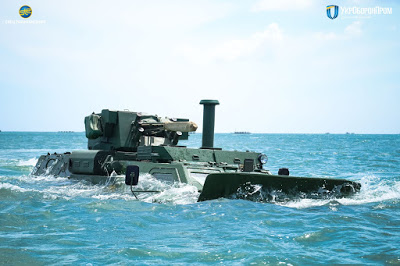 Immediately move the test elaborated on the correspondent of the Indonesian edition of Angkasa Ario Nugroho, who described in detail all the stages of testing Ukrainian armored vehicles, which took place January 19, 2017.

Marsh 100 km long started during the night, when the column with the BTR-4M on its course motorways left the capital of Indonesia, Jakarta, to the coast of the Java Sea. And at dawn armored amphibious tested its properties by the sea. 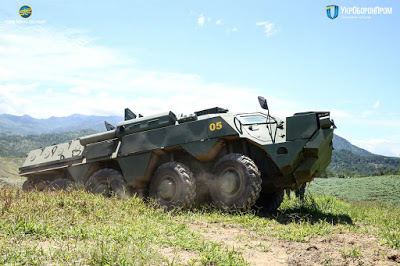 “Combat vehicles stably and smoothly behave in the water,” – says the Indonesian edition. BTR-4 have the wheel formula 8 × 8, equipped with Deutz engines and transmissions the Allison, which correspond to NATO standards. These engines are characterized by their reliability, efficiency and capacity.

After water test, a column of armored personnel carriers 4M went to the place of shooting. Despite the fact that the road to the shooting range has been eroded powerful rains, Ukrainian fighting vehicles have successfully completed sea trials. As the newspaper notes Angkasa, the Indonesian military even specially prepared tracked vehicles for towing without waiting for such powerful running properties BTR-4M. 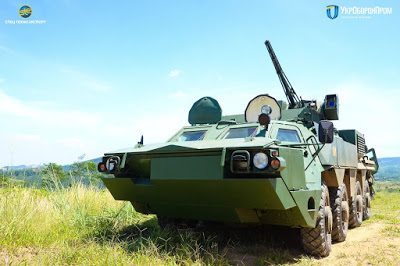 The place of fire tests have been chosen canyon, which allows you to test the ability of the main Ukrainian armament combat vehicle.

Each of the five BTR-4M, who took part in the shooting, has successfully hit the target conditional on certain distances, increasing the accuracy of the Ukrainian weapons. Indonesian journalists were frankly amazed at the power of military unit “Sail”, which is installed on BTR-4M, and modern digital sighting system.