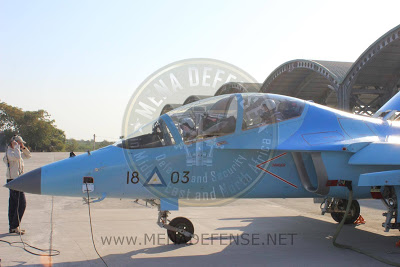 A ceremony organized on the spot shows the devices in a blue livery and carrying their definitive registration 1801-1802-1803.

The number of Yak 130 ordered by Myanmar is not known, the initial contract for the first 3 units was signed in June 2015.

The Yak 130 is a lightweight advanced training fighter, which features Air-to-Air and Air-to-Ground capabilities with the ability to fire intelligent ammunition. It was adopted by the Algerian, Russian, Belarusian and Bangladeshi air forces.

Strong international competition exists in the field of advanced training aircraft, especially with the launch of the American TX trainer program, for the replacement of the T38 and which oppose the Leonardo M346, the AirlandTextron Scorpion, the KAI T50 Golden Eagle and the Boeing/Saab TX.