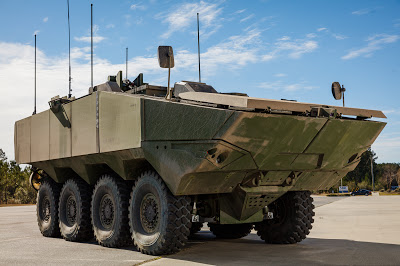 SAIC has rolled out the first of 16 Amphibious Combat Vehicles that the US Marine Corps will use for testing. It is an enhanced, customized variant of the ST Kinetics TERREX 8×8 combat vehicle fielded by the Singapore Army. (photo : SAIC)

CHARLESTON, S.C.–Science Applications International Corp. (NYSE: SAIC) today unveiled its first Amphibious Combat Vehicle (ACV) 1.1 prototype to the U.S. Marine Corps during a ceremony held at the company’s integration facility in Charleston, South Carolina. This vehicle is the first of 16 to be delivered for testing by the Marine Corps, which is scheduled to begin next month.

“SAIC is incredibly proud to deliver this modern, high-tech, highly-capable solution to the Marine Corps. Our employees and team members worked tirelessly to successfully deliver this solution to the Marine Corps on time despite delays due to an initial contract award protest,” said Tom Watson, SAIC senior vice president and general manager of the U.S. Navy and Marine Corps Customer Group. “We are confident that this vehicle is equipped with the latest technology which will strengthen the amphibious capabilities of the USMC today and into the future.”

Within the vehicle, state-of-the-art technologies include 360-degree situational awareness, force protection through leading blast protection seats, and a V-Over-VTM hull design to keep Marines alive in combat. All Engineering, Manufacturing, and Development (EMD) vehicle hulls are manufactured and integrated in the United States.

“Our vehicle was designed with future Marines in mind. We are equipping a new generation of Marines with the latest technology that they have grown accustomed to and using it as a way that will improve warfighting capability and could potentially save their lives,” said Bernie Ellis, SAIC ACV 1.1 program manager.

SAIC has a proven track record – more than 10 years – of modifying and upgrading armored vehicles for the Department of Defense ensuring warfighters are protected during combat, while securing command and control and repair capabilities. ST Kinetics is one of Asia’s leading land systems and specialty vehicles companies having delivered hundreds of TERREX vehicles to the Singapore Armed Forces as well as the Warthog, a twin chassis, multi-purpose articulated tracked carrier, to the British Armed Forces.