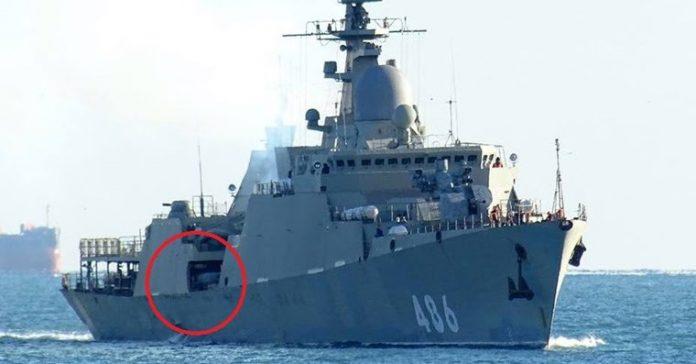 New Gepard 3.9 for Vietnamese Navy during sea trial in the Novorossiysk (all photos : forums.airbase.ru)

Pair of Gepard 3.9 warship (3rd and 4th) are likely to be equipped with two torpedo launchers arranged along the hull.

Recently, photographer Evgeniy (Russia) has posted the latest photos in the Shipspotting online warship 3rd Gepard 3.9 for Vietnam People’s Navy is the Novorossiysk port after the sea trials 02/17/2017 on the Black Sea.

Warship 3rd Gepard 3.9 plant as number “486” has completed the entire superstructure including the installation of weapon. At the corner of this photo can be seen at the location between the hull seems torpedo launchers (red mark) – anti-submarine weapons aboard Project 11661E Gepard 3.9 frigates of the Vietnam.

Earlier, Russian media said that new pair of ships Vietnam Gepard 3.9 is equipped with sonar and submarine weapons but did not specify type.

Gepard 3.9 ships 3rd frigates (plant number 486) was launched 27/04/2016 day, and the 4th (plant number 487) dated 26.05.2016 launched at Zelenodolsk plant named AMGorky . It is expected that the technical handover pair vessel for Vietnam People’s Navy will take place in the middle of this year. According to the notification of the plant, pair Gepard 3.9 Project 11661E ships are larger than pairs of vessels 011 Dinh Tien Hoang and 012 Ly Thai To, country specific stretch of about 2,200 tons full load, 102,4m long, wide 14,4m. The expansion of the size compared to 2 old ship might be to integrate surveillance system and anti-submarine weapons.

Regarding the number of crew, while two old ships to more than 100 operators, the two new vessels will just 84 people. This suggests that, Gepard 3.9 improvements will be enhanced automation allows reducing the number of sailors despite larger size vessels. Also, Gepard 3.9 enhancements will equip new momentum system that allows ships to reach a maximum speed of 29 knots/h (higher than 28 knots/h 2 old Gepard vessels).