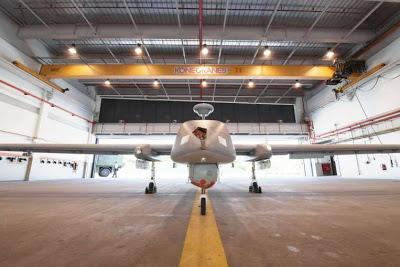 SINGAPORE – It can fly as high as 6km in the sky, cruise at speeds as fast as 130kmh, and can be deployed up to 200km away from a remote location.

This drone – or unmanned aerial vehicle (UAV) – can also fly for more than 24 hours continuously, and take off and land automatically.

It is no ordinary drone though, but the Singapore airforce’s latest “eye-in-the-sky” – the Heron 1, which was declared combat-ready on Wednesday (March 15) by Defence Minister Ng Eng Hen.


It is a milestone which places the Singapore Armed Forces’ (SAF) on a par with other advanced militaries in intelligence and surveillance capabilities.

In a ceremony held at Murai Camp, Dr Ng marked the Heron 1’s achievement of the Full Operational Capability (FOC) status by the Republic of Singapore Air Force’s (RSAF) 119 and 128 Squadrons.

In a speech, he said: “It’s a significant milestone. The FOC of the Heron brings RSAF’s (unmanned) aerial capabilities to the level of advanced militaries globally.” 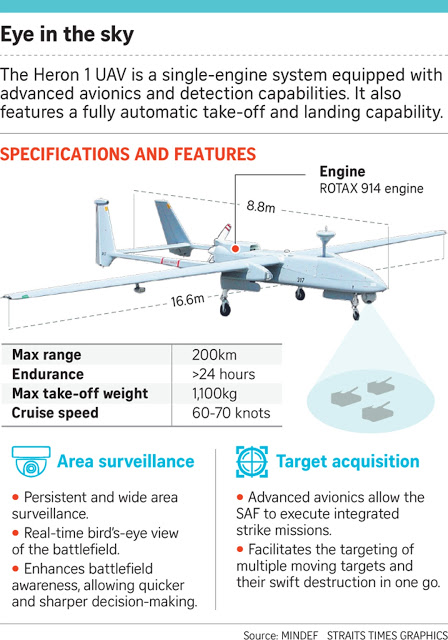 With its advanced imaging sensors, the Heron 1 provides ground commanders with a real-time, bird’s eye view of the battlefield, and it can also guide munitions to targets precisely using its laser designator.

Inaugurated into the RSAF in 2012, the drone can be deployed alongside fighter aircraft and attack helicopters.

To achieve FOC, the squadrons’ personnel have to be fully trained to operate, maintain and deploy the Heron 1 in operations.

The UAV’s capabilities are also validated in missions, to ensure integration with the SAF’s network of sensors and fighting systems.

Dr Ng said the 119 and 128 Squadrons have gained considerable expertise and depth, through many high-level exercises, such as multi-agency counter-terrorism exercises in Singapore, and Exercise Forging Sabre in Arizona, US.

Commending the RSAF and the UAV Command, Dr Ng also said SAF has come a long way since 1979, when it launched its first Mastiff remotely piloted vehicle, and that it has steadily built up its experience on successive and more advanced platforms.

The Heron 1 is made by the Israel Aerospace Industries Malat division and will replace the Searcher-class UAV, which has been in service since 1994.