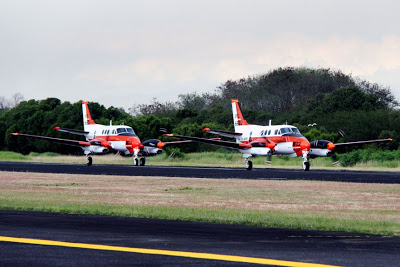 The two aircraft landed at the said facility around 10 a.m.

Present during the transfer ceremony was Defense Secretary Delfin Lorenzana and his JSMOD counterpart Kenji Wakamiya.

PN spokesperson Capt. Lued Lincuna said these aircraft were leased from the JMOD as part of the Navy’s efforts to enhance its capability in humanitarian assistance and disaster relief operations, limited transport, and maritime domain awareness including maritime air surveillance and intelligence surveillance reconnaissance.

The whole project involves five units of TC-90s. The remaining three units are expected to arrive by mid-2018.

The Department of National Defense (DND) earlier announced that the Philippines will be re-equipping the TC-90s as Japan have stripped of some its equipment, including its surveillance systems.

The country will pay Japan USD7,000 each for the first four aircraft yearly and only USD200 for the fifth, or total of USD28,200 as stipulated in its lease agreement.

The DND added it is also looking at the possibility of using the TC-90 for 20 years while the military is upgrading its equipment.

The TC-90, which is part of the Beechcraft King Air aircraft family, was offered by Japan shortly after the Agreement Concerning the Transfer of Defense Equipment and Technology was finalized last Feb. 29, 2016.

The TC-90’s patrol range is double those of small Philippine aircraft which only has a maximum range of 300 kilometers. (PNA)

Japanese TC-90s likely to be donated to PN soon

SANGLEY POINT, Cavite (PNA) — There is a strong possibility that all five Japanese Beech King Air TC-90s will be donated to the Philippine Navy (PN) at a later day.

This was stressed by PN spokesperson Capt. Lued Lincuna during the sidelights of the turn over ceremonies of the two TC-90 aircraft in Sangley Point, Cavite Monday.

“The whole project, which involves five units of TC-90s, is pursuant to the agreement between the Philippines and Japan signed in Manila on Feb. 29, 2016. The remaining three units are expected to arrive by the end of March 2018. The PN will temporarily lease the said aircraft amounting to USD 28,000 per year while awaiting for the legal framework that would allow Japan to donate defense equipment to foreign countries,” he added.

The TC-90s were leased by the Philippines from the Japan Minister of Defense as part of the efforts to boost the PN’s capability in humanitarian assistance and disaster relief operations, limited transport, and maritime domain awareness including maritime air surveillance and intelligence surveillance reconnaissance.

@username
44.1k Followers
Follow
Previous articleThailand Modernises V-150 Into HMV-150
Next articleSuper Hornet and Gripen “are Still in the Running” for MRCA Programme