Cost of Submarines Could Rise: Navy 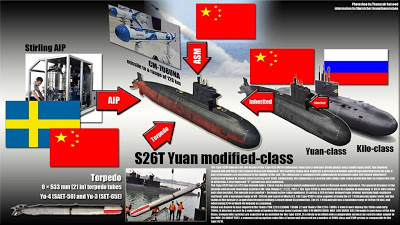 THE Royal Thai Navy admitted Monday that the deal to buy three Chinese submarines could cost more than Bt36 billion – the initial price given by the government – if the Navy believes it requires more advanced technology.

“There might be additional costs if they enhance the capability of submarines in the future,” Navy Deputy Chief of Staff Vice Admiral Patchara Pumpiched said.

“But we’ll also make sure that all equipment that we request in the agreement is obtained.

“I don’t think any Defence Ministry or the Navy of any country would get a deal like we have,” Patchara added, suggesting the price was a bargain for Thailand.

The vice admiral, together with four other high-ranking officers, spoke at a press briefing to explain why the Navy gave thumbs up to the Yuan Class S26T submarines.

During the 90-minute press conference, the Navy stressed that the multi-billion-baht deal was “very cheap” considering additional services offered by the Chinese government. (Nation) The Royal Thai Navy will tomorrow provide details of its plan to buy Chinese-made submarines, the first of which costing more than Bt10 billion, to top officials of the Office of Auditor-General.

The team led by Auditor-General Pisit Leelawachiropas will visit the Navy headquarters and to meet with Admiral Leuchai Reuddit, the Navy chief of staff, who is the chairman of the submarine acquisition committee.

The terms of reference for the multi-billion-baht purchase will be provided to the Auditor-General team to facilitate its investigation of the controversial scheme, which requires the government to make instalment payments for at least seven years.

Pisit has previously said the investigation would be conducted with respect to the procurement deal being “highly confidential”. (Nation)