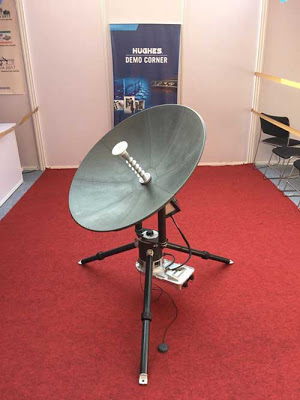 Hughes Defense is marketing a multi-band transportable manpack satellite communications (SATCOM) terminal that can be assembled in as quickly as 10 minutes, according to a company executive.

Wayne Marhefka, Hughes Defense senior director of business development, told Jane’s in a recent interview the company saw an opportunity for the HM500 terminal after a meeting with an Indian military signal corps commander who expressed a desire for an easy-to-use, lightweight terminal that weighs 15 kg or less. The terminal, weighing less than 14 kg without batteries, is dramatically lighter than automatic pointing terminals that Marhefka said can weigh 100 kg or more. Marhefka said he returned to India six months later with an operational terminal. Not only did he perform the demonstration for the India military official, but he said the terminal has performed another 20 demonstrations for various military users. Marhefka said Indonesia, Malaysia, and Singapore have also expressed interest in a terminal similar to the HM500.

The terminal, Marhefka said, takes less than 15 minutes to assemble and as quickly as 10 minutes for someone with training. The terminal has three legs to serve as a tripod that screws into a base, which has the modem and connectors. The assembly includes eight panels made of composite materials, including two other pieces, Marhefka said.

The terminal is compatible with X-, Ku-, Ka-, and military Ka-bands. It would work with the US Wideband Global SATCOM (WGS) constellation, Marhefka said, but the terminal has not been through WGS certification. Marhefka said the HM500 is designed to work with different types of Hughes modems, including the HM and HX product lines as well as the Jupiter high-throughput capability the company is developing.