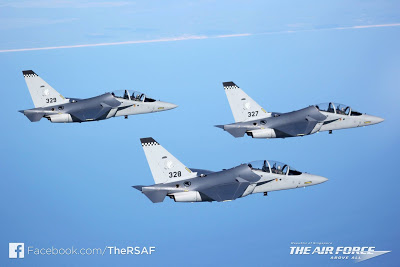 Second Minister for Defence Mr Ong Ye Kung visited the Republic of Singapore Air Force (RSAF)’s 150 Squadron at Cazaux Air Base, France last evening (SG time). During the visit hosted by the Chief of Air Force Major-General Mervyn Tan, Mr Ong received a brief on the detachment’s training programme and boarded the M-346 Advanced Jet Trainer for a familiarisation ride. He also met the families of the RSAF personnel deployed there and thanked them for their strong support. 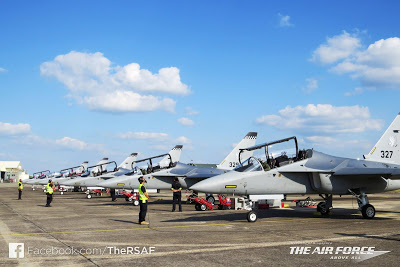 Speaking about the quality of the training in France, Mr Ong said, “Our fighter pilot trainees here have access to advanced systems and receive high-quality training. They train on the M-346 Advanced Jet Trainer to conduct a wide range of operational missions. Such training is important as they provide the pilot trainees with a strong foundation to operate the F-15SG and F-16 aircraft later on. We appreciate France’s support and hospitality for our detachment, which will be celebrating its 20th anniversary here next year. The opportunity to train in France has strengthened the professionalism and capabilities of the RSAF, and reinforces the personal ties between the RSAF and their French counterparts here.”

The Cazaux Air Base in France is home to RSAF’s 150 Squadron and its personnel, including pilots, Air Force Engineers, trainees and support staff.  Since 1998, the RSAF has conducted flying training in Cazaux; such overseas training and detachments allow the RSAF to overcome the land and airspace constraints in Singapore. Both the RSAF and the French Air Force also interact regularly through visits, professional exchanges and courses. These interactions have contributed significantly towards the excellent and long-standing defence relations between the two countries, and strengthened the mutual understanding and camaraderie amongst the personnel of both Air Forces.