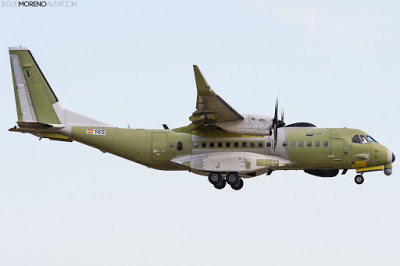 Airbus is promoting its C295 maritime surveillance aircraft (MSA) to the Royal Thai Navy (RTN) in the first part of a regional tour in which the company aims to promote the platform’s intelligence, reconnaissance, and surveillance (ISR) capabilities to Asian military operators.

The C295 MSA arrived in Thailand on 3 July, and is being displayed at the RTN’s U-Tapao Air Base in Chonburi before similar promotional visits to Vietnam, Malaysia, the Philippines, and South Korea – all countries with stated maritime patrol requirements. Subsequently, Airbus will promote the aircraft to North American operators.

“During its tour, the C295 will demonstrate its advanced ISR capabilities as well as the platform’s versatility and suitability for potential operators, especially in the Asian region,” Airbus said. The company is also promoting the aircraft to meet regional requirements to enhance surveillance, search and rescue, transport, medical evacuation, and humanitarian missions.

Airbus said the aircraft on display in Thailand is a model of the platform recently delivered to the Brazilian Air Force to meet its search and rescue and maritime patrol requirements.

Airbus said it sees opportunities to supply the aircraft to the RTN, which is expected in the coming years to replace its ageing fleets of Dornier 228 and Fokker F27 Friendship patrol craft, which were acquired from the 1980s onwards.