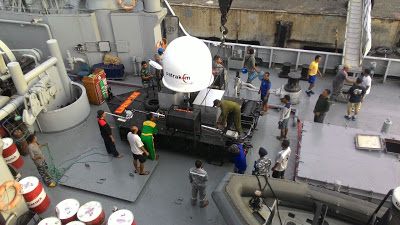 The Indonesian Navy has equipped a number of its ships with SATCOM systems. Move will improve ship-to-shore and ship-to-ship communications across the service (photo : Patrakom)

The Indonesian Navy (Tentara Nasional Indonesia – Angkatan Laut) has completed the installation of Ku-band stabilised parabolic antennas with radar domes, and associated satellite communication (SATCOM) systems on four of its landing platform dock ships, and across the Diponegoro (SIGMA) and Bung Tomo classes of surface combatants.

According to information provided to Jane’s by TNI-AL and industry sources, the installations were done between mid-2016 and early-2017 by PT Patra Telekomunikasi Indonesia, which is a subsidiary of majority state-owned Telkom Indonesia.

The SATCOM system allows the ships to receive and transmit of two-way data and voice traffic, which can be used for communication applications such as email, web browsing, and voice over internet protocol (VOIP).

Jane’s understands that coverage for such services on the Ku-band are available at most of the maritime regions that the TNI-AL vessels are expected to operate in, although the band is more susceptible to rain fade than C-band systems.

The TNI-AL is expected to equip more of its ships with SATCOM systems, although no details on which vessels these may be are immediately available. This is in line with a wider effort by the Indonesian Armed Forces (TNI) to adopt more of such communication systems in the future.