Rheinmetall is due to complete deliveries of the Leopard 2 RI main battle tank to Indonesia by March 2017 (photo : Yudi Yuviama)

Indonesia ordered 61 Leopard RI MBTs among other vehicles in a package worth some $280 million in December 2012.

Indonesia was the second Asian country to adopt the Leopard 2 after Singapore, although some wonder at Indonesia’s wisdom in purchasing such heavy MBTs given the country’s archipelagic nature, poor roads and jungle-clad terrain. 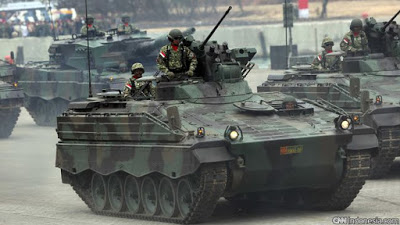 All Leopard 2+ tanks have been handed over, this variant being a Leopard 2A4 with retrofitted air-conditioning system. Meanwhile, the first eight Leopard 2 RI MBTs reached Indonesian shores in May.

‘RI’ tanks are 2A4s taken from surplus German Army stocks and upgraded by Rheinmetall to include an add-on Advanced Modular Armour Protection (AMAP) suite from IBD, plus all-electric gun control equipment to replace its electro-hydraulic system. The driver benefits from a rear-view camera, plus a 17kW auxiliary power unit fuels air-conditioning and other systems.

Modification to the 120mm 44-calibre gun and associated sight system allows DM11 programmable HE rounds to be fired. PT Pindad, Indonesia’s premier state-owned defence manufacturer, is partnering with Rheinmetall to produce ammunition for and to support the Leopards and Marders. 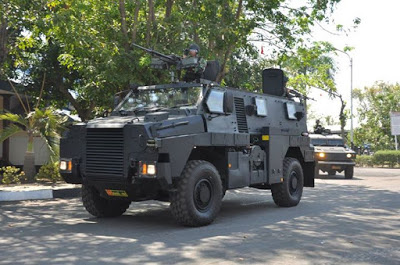 Indonesian Marders have upgraded power packs, suspension and ballistic protection, plus an air-conditioning unit is fitted. The hull roof is raised 300mm to increase volume in the troop compartment. A Pindad spokesman told Shephard: ‘We’re currently discussing with the army to assist a second batch in a Marder enhancement programme that will enable conversion into various types: command, ambulance and logistic versions.’