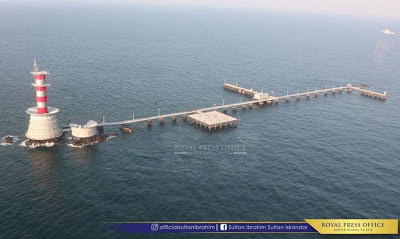 The Abu Bakar Maritime Base, built across the uninhabited features at the eastern opening of the Strait of Singapore, comprises a 316m jetty, a helipad, and a lighthouse. (photo: Press Office)

KUALA LUMPUR — Malaysia has set up a new maritime installation on Middle Rocks, which consists of two clusters of rocks 1km south of Pedra Branca, the island awarded to Singapore in a 2008 International Court of Justice (ICJ) ruling that Putrajaya is challenging.

The Abu Bakar Maritime Base, built across the uninhabited features at the eastern opening of the Strait of Singapore, comprises a 316m jetty, a helipad, and a lighthouse, IHS Jane’s Defence Weekly reported.

The installation was inaugurated by the Sultan of Johor, Ibrahim Ismail Iskandar, on Aug 1. Also present at the inauguration was the Malaysian navy chief, Admiral Ahmad Kamarulzaman Ahmad Badaruddin, as well as senior officials from other maritime agencies, the defence magazine added.

According to a post on the Johor Sultan’s Facebook page, the installation, a project under the auspices of the National Security Council, “is aimed at safeguarding Malaysia’s sovereign territory and waters and for conducting marine scientific research”. The base also seeks to reaffirm “Malaysia’s absolute sovereignty over the Middle Rocks”, the post also said. On June 30, Malaysia filed a fresh application to the ICJ to challenge its ruling on Pedra Branca in favour of Singapore. The Malaysian government said the move was necessary so that both countries can maintain good ties in managing maritime zones and airspace.

It added that this application was “separate and autonomous” from an earlier one by Malaysia to the ICJ in February to revise its ruling on Pedra Branca.

The Ministry of Foreign Affairs (MFA) responded to the application by saying that the ICJ judgment was “clear and umambiguous” and that Malaysia’s case was puzzling and groundless.

“Singapore will therefore oppose Malaysia’s application for interpretation, which we consider to be both unnecessary and without merit.”

An earlier February application by Malaysia followed what it claimed was the discovery of new facts from three documents recently discovered in the United Kingdom’s national archive, which it said would have resulted in a “different conclusion” by the court.

The row over the ownership of Pedra Branca dates back to 1979, when Malaysia published a map indicating the island to be within the country’s territorial waters.

Singapore lodged a formal protest with Malaysia in early 1980. It took more than 20 years for the dispute to be brought before the ICJ in July 2003.

In May 2008, after several rounds of written pleadings and public hearings, the court ruled Pedra Branca to be Singapore territory.

It also ruled that sovereignty over the Middle Rocks belongs to Malaysia.

In a statement in May after Singapore filed its rebuttal to Malaysia’s first application to the ICJ, the MFA had said that the Republic was confident of its case and its legal team.

“The next step is for the parties to present their oral arguments after the ICJ has fixed the schedule for the oral proceedings,” it added then.