Retired from Service, Squirrels were Sent to Museum 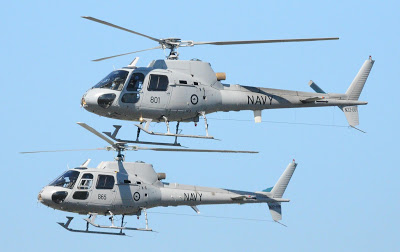 The Fleet Air Arm Museum in Nowra, New South Wales, has a new exhibit, with the arrival of ‘862,’ an AS350BA Squirrel helicopter from 723 Squadron.

Aircraft 862 was the not only the first of the original six Navy Squirrels to embark long term, thirty years later she was the last.

In August 2015, following her final deployment onboard HMAS Anzac during the Centenary of Anzac celebrations at Gallipoli, 862 retired from service.

Joining over 30 aircraft and numerous aviation artefacts, 862 has a new role as an exhibit helping to tell the story of the Navy’s Fleet Air Arm at the Museum, just outside the gates of HMAS Albatross.

From service with 723 Squadron, 862 was assigned to Raytheon Australia who demilitarised the aircraft as part of the decommissioning process, and prepared for her for display.

Mr Terence Hetherington, Manager of the Museum, was closely involved with the process of taking 862 from an operational asset to a curated exhibit.

“Aircraft 862 is a magnificent example of a capability that provided training opportunities, and developed the operational proficiency, serving the Fleet Air Arm for over thirty years, including during Gulf War,” Mr Hetherington said.

“She is a welcome addition to the Museum collection.”

Through deployments and exercises, and opportunities for aircrew and flight deck teams to consolidate their training, the Squirrels have provided a long term capability protecting Australia’s interests and assets.

As part of 723 Squadron, 862 was the first Squirrel to embark long term on an Adelaide class guided missile frigate in early 1985.

She then served in HMAS Canberra II during the 1987 Fiji Coup and in HMAS Adelaide II during and after Gulf War I in the 1990s.

862 was one of four Squirrels that served on Australian Navy ships during the 1991 Gulf War.

The aircraft, fitted with updated avionics and a door mounted machine gun (MAG58), were used for shipping surveillance, assistance in merchant ship boardings, mine searches and light logistics support.