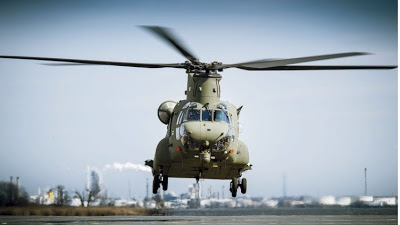 Indonesia has submitted a request for price and availability of the Boeing CH-47F Chinook (photo : Boeing)

Boeing sees an opportunity to expand its presence in Indonesia with sales of additional AH64E Apache attack helicopters and its CH-47 Chinook heavy-lift helicopter, company officials said on 2 November.

The Indonesian Army (Tentara Nasional Indonesia – Angkatan Darat: TNI-AD) ordered eight Apache helicopters in 2013 for USD296 million, with the Foreign Military Sale (FMS) contract representing the largest US sale of a new military platform to Indonesia since Washington lifted an arms embargo on the country in 2005.

Speaking at a media briefing at the Indo Defence 2016 exhibition in Jakarta, officials said there is potential for sales of another eight Apache helicopters to the TNI-AD. “They have an appetite for maybe eight more and we would like to fulfil that,” said Edward Hassiepen, Boeing’s director for vertical lift global sales and marketing.

“After the fielding of the first Apache helicopter there will be a definitive answer as to potential follow-on purchases,” added Yeong-Tae Pak, Boeing’s regional director for Southeast Asia.

The officials said that Boeing is scheduled to begin production of the TNI-AD’s initial Apache helicopter in December 2016, with flight tests expected in June 2017. Deliveries of the eight aircraft are expected to be completed by the end of 2017.

About the TNI-AD’s potential purchase of the Chinook, Pak said that Indonesia has already submitted to the US government a request for price and availability of the latest CH-47F version of the platform. The programme will move ahead once Jakarta issues a letter of acceptance (LOA).

“Indonesia’s request covers between four to 10 Chinooks,” said Pak. “But if you look at Indonesia’s geography – it’s a huge country – I would suspect that once we get the initial sale there will be more requirements. In a country of this size there are expansive requirements for capabilities such as humanitarian relief and firefighting, so we believe there is a market for more than what has been specified.”