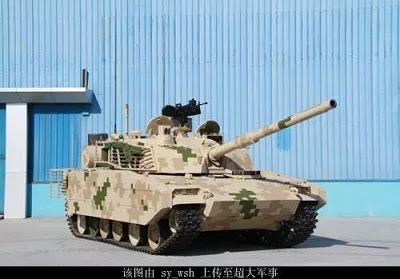 An example of the VT5 was on static display in a hall devoted to armoured vehicles, and its designation indicates Norinco has aimed it squarely at the export market.

The heritage of the VT5 is easily discerned since the People’s Liberation Army (PLA) began fielding its own Norinco-designed ZTQ-series light tank in about 2014. It is estimated to weigh about 35t.

Such a tank in this weight class is ideal for operations in mountainous areas such as Tibet, which is where most ZTQ tanks have been seen to date.

The VT5 weighs between 33t and 36t dependent on what armour package is installed. This includes a modular armour package of composite armour and/or explosive reactive armour installed atop the base steel armour. The VT5 on display in Norinco’s hall at the air show featured slat armour on the turret sides and hull flanks. However, no ERA was installed on the front of the turret.

Its dimensions are: 9.2m long, 3.3m wide and 2.5m high. This compares to a 52t weight for the larger and obviously much heavier VT4. The running gear consists of six road wheels either side.

The vehicle is powered by a 1,000hp engine, while two fuel drums mounted on the rear of the hull increase the range of the VT5.

The turret features a 105mm main gun, likely to be able to fire missiles, and the main armament is combined with a fire control system able to take out targets up to 3,000m away. The gun is fed by an autoloader, as is typical for Chinese MBTs.

Two crew members are ensconced in the turret (gunner on the left and commander on the right). The commander has a panoramic sight for hunter/killer engagements, while a remote-controlled weapon station mounting a machine gun is also fitted atop the turret.

Norinco also had on display an improved VT2 MBT with a turret-top RWS and ERA. Also present was a specimen of the VT4, of which Thailand is the only customer to date after ordering 28 units for $4.9 million each on 21 March.