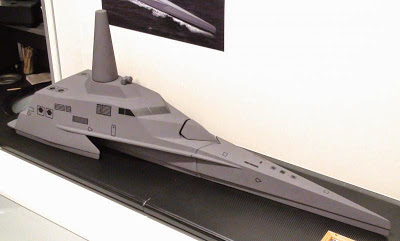 Lundin rises from the ashes

Shipbuilder PT Lundin is on track to deliver a replacement vessel for the Indonesian Navy’s KRI Klewang that was completely destroyed in a fire four years ago, the company’s CEO has confirmed.

John Lundin told Shephard that his company was still on schedule to deliver a new 63m trimaran-hull vessel ‘late next year’, with build progress now over 30% complete at its facility in Banyuwangi, East Java.

However, shortly after being delivered in 2012 the ship caught fire and was ultimately lost. Despite an investigation from several teams, and a focus on the ship’s composite structure, the ultimate cause of the fire remains unknown and no blame has been attributed to PT Lundin.

‘After the accident there has been some re-evaluation and assessments, but we are hopeful we can get it on the water next year,’ said Lundin. ‘Of course, people had some concern about composites after this – that’s why we started several research projects.’

PT Lundin has worked with Indonesian research laboratories to get approval for a new solution that it calls a ‘self-extinguishing resin’, which is a component of the composite material. ‘The performance is much better than aluminium,’ explained Lundin.

Recent reports have indicated that Indonesia has cut funding for the project, and primary mission system integrator Saab – which was planned to provide the ship’s CMS, weapons and radar systems – had also pulled out of the project.

Lundin could not explain the reason for Saab’s withdrawal from the project. He said that the first boat could become a technology demonstrator, but reaffirmed that the project on the whole was not cancelled.

Integration of a new CMS and weapon systems will be determined by the Indonesian Navy, with potential options for anti-ship missiles being the Chinese C-704, Saab’s RBS15, the Kongsberg Naval Strike Missile and the MBDA Exocet.

Interest in the stealth ship is not limited to Indonesia, said Lundin, with several countries showing an interest for ‘light missile boats’, which are smaller and cheaper than traditional vessels. The ships are particularly suited for operations such as counter-piracy in shallow littoral waters.

The vessel can embark a 12m RHIB, big enough for a 10-person boarding crew.

‘If you do not have global interests we believe in fast and short range,’ said Lundin. ‘Small, high-tech, boats are also easier on infrastructure.’