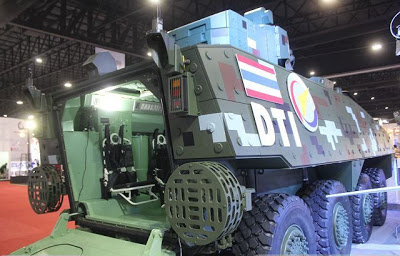 DTI also signed MoU with Royal Thai Navy to develop the 8×8 amphibious vehicle aim to replace the AAV and has DTI 8×8 Black Widow Spider undergoing the test and evaluation at the Royal Thai Army.

The DTI has ever offered in a 8×8 wheeled armored vehicle prototype DTI 8×8 Black Widow Spider to the Army to consider. Currently, tests are being evaluated and may be mounted with turret.

Earlier last year, has signed with the Navy to develop a 8×8 wheeled armored vehicles for the mission of the Marine Corps. This could replace the AAV in the future, on the other side of ST Kinetics developed armored wheeled 8×8 model Terrex 2 and has been chosen as one of two vehicles who had been promised were initially to compete in the supply of wheeled armored vehicles of the US Marines.