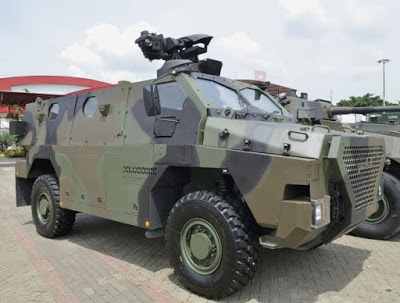 The Sanca is based on the Thales Australia Bushmaster, and has been modified for Indonesian requirements. (photo : Jane’s)

Indonesian state owned company PT Pindad launched a new 4×4 mine-resistant armoured vehicle on 3 November that has been developed through a collaboration project with Thales.

The vehicle, known as Sanca, is based on Thales Australia’s Bushmaster multirole protected platform but has been customised for Indonesian requirements, industry officials said at the launch ceremony at the Indo Defence 2016 exhibition in Jakarta.

Speaking to IHS Jane’s , they added that PT Pindad is close to securing a contract with the Indonesian Ministry of Defence to produce an initial batch of 50 Sanca vehicles for the Indonesian Armed Forces (TNI).

A total of 30 will be operated by TNI peacekeeping forces and the remainder deployed by the TNI special forces, otherwise known as Kopassus. (Jane’s) 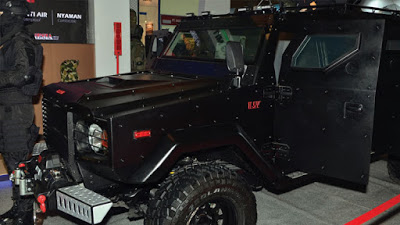 The Indonesia Light Strike Vehicle (ILSV) will enter production is 2017 with an undisclosed customer placing an initial contract for 20 units.

Prime contractor for the ILSV is Pt Jala Berikat Nusantara Perkasa (Hall D, Stand 244) and the vehicle is based on a Toyota Land Cruiser (4×4) chassis fitted with an all-welded monocoque steel hull.

The ILSV example being shown at Indo Defence 2016 is in the right-hand drive configuration and outfitted for the armoured personnel carrier (APC) mission. In addition to the commander and driver seated to the rear of the protected diesel engine compartment, space is provided for six dismounts to the rear.

Each of these are provided with individual blast-attenuating seats that fold up when not required. Crew and dismounts can rapidly enter and leave via two doors in either side and a larger single door at the rear.

Firing ports and associated vision devices are provided in the rear troop compartment and there is a mounting on the roof for a 7.62mm machine gun.

Standard equipment includes an air conditioning system and a front- mounted electrically operated winch for self-recovery operations. Gross vehicle weight is typically around 2,755kg with the 175hp engine giving a maximum road speed of up to 100km/h.

The first example of the ILSV shown in 2014 had an open compartment towards the rear, but the vehicle shown at Indo Defence 2016 has the fully enclosed body. (Jane’s)