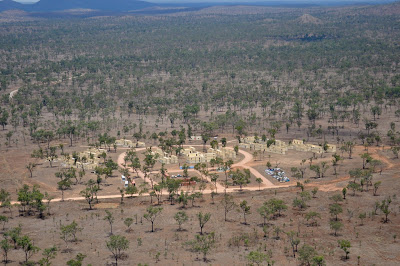 View from the heli-familiarisation flight of an urban operations training compound in the Townsville Field Training Area (TFTA). (all photos : Sing Mindef)

The visit to Townsville follows the signing of the Memorandum of Understanding (MOU) on Military Training and Training Area Development by Dr Ng and Ms Payne yesterday, which was witnessed by Prime Minister Lee Hsien Loong and Australian Prime Minister Malcolm Turnbull. Under the MOU, Singapore and Australia will jointly develop the TFTA and Shoalwater Bay Training Area. This will allow the Singapore Armed Forces (SAF) to meet its growing requirements for motorised and armoured live-firing training, as well as combined arms and joint training. 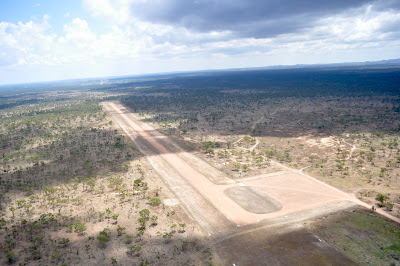 Speaking to the media after the heli-familiarisation flight, Dr Ng noted the SAF’s unprecedented access to Australian training areas for the next 25 years, which will open up more training opportunities to hone the SAF’s capabilities and to strengthen our defences. He said, “The Townsville Field Training Area is about four times the size of Singapore. The Australian Defence Force is also in the process of acquiring another piece of training ground and joining this so that the total will be five times the size of Singapore…It’s a very rare piece of training ground with enough size and distances for our armoured vehicles, for our mechanised and motorised brigades. And this is now available to us because of the Memorandum of Understanding, and it shows how significant the MOU that was signed is”.

Dr Ng and Ms Payne welcomed the elevation of defence ties to a mutually beneficial comprehensive strategic partnership. They also exchanged views on regional and security issues, which highlighted the convergence of strategic interests and perspectives between both countries. Both Ministers reaffirmed the importance of the Five Powers Defence Arrangements, and ASEAN Defence Ministers’ Meeting (ADMM)-Plus in the regional security architecture. The SAF and the Australian Defence Force (ADF) share a long history of military cooperation, with extensive interactions that include bilateral and multilateral exercises, mutual visits, professional exchanges, the cross-attendance of personnel at professional courses, and operational deployments such as in Afghanistan and the Middle East. The SAF also conducts training in other Australian training areas such as the Shoalwater Bay Training Area, Queensland; Pearce, Western Australia; Oakey, Queensland; and Tamworth, New South Wales.

Dr Ng was earlier in Canberra, Australia, from 11 to 13 October 2016, as part of Prime Minister Lee Hsien Loong’s delegation to Australia together with Minister for Trade and Industry (Trade) Lim Hng Kiang and Minister for Foreign Affairs Dr Vivian Balakrishnan.

HARUS BACA :  Russian Ministry of Defense will Purchase a Batch of BT-3F APC