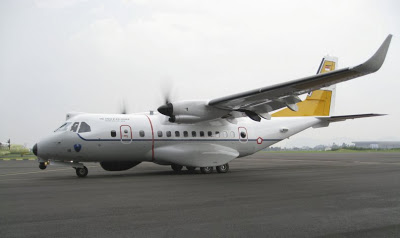 SAGE is a digital sensor which will be used to detect and locate potentially threatening radar systems (photo : Leonardo)

Leonardo-Finmeccanica’s SAGE Electronic Support Measures (ESM) system has now entered service on the Indonesian Air Force’s first modified CN-235 Maritime Patrol Aircraft (MPA). The modification programme was led by PT Dirgantara Indonesia (PTDI) and Integrated Surveillance and Defense (ISD) in the US. SAGE is a digital sensor for aircraft used for intelligence, surveillance and reconnaissance (ISR) missions. It can identify the location of Radio Frequency (RF) emitters such as surface-to-air missile fire-control radars from a single aircraft, enhancing situational awareness.

The first CN-235 was modified during 2016, with SAGE being installed and integrated with the aircraft’s tactical mission system. Airborne flight testing then took place during the summer. Leonardo is working closely with ISD and PTDI to deliver this capability to the Indonesian Air Force and is looking forward to future business opportunities with the two companies. The Indonesian Air Force will be operating the SAGE system in the maritime environment, where a clear understanding of an adversary’s use of the electromagnetic spectrum is essential. SAGE provides this capability in a cost-effective and sophisticated digital package and will allow the IAF to detect and locate potentially threatening radar systems.

SAGE is part of Leonardo’s electronic warfare product portfolio that includes individual sensors as well as fully integrated defensive aid suites. The company’s expertise in the domain allows it to offer a dedicated Electronic Warfare Operational Support (EWOS) facility, boosting the effectiveness of all EW products. SAGE is readily exportable and is in use with the Republic of Korea as part of a package of electronic warfare equipment for the country’s Maritime Operational Helicopter (MOH) programme and will also enter service on the AW159 helicopter in Brazilian Navy service in 2017. In October 2016, SAGE was demonstrated on the Leonardo Helicopters SW4-Solo Optionally-Piloted helicopter and the Schiebel S-100 CamCopter UAS during the Royal Navy’s Unmanned Warrior exercise in the UK. SAGE is effective over a range of operating domains and platforms.